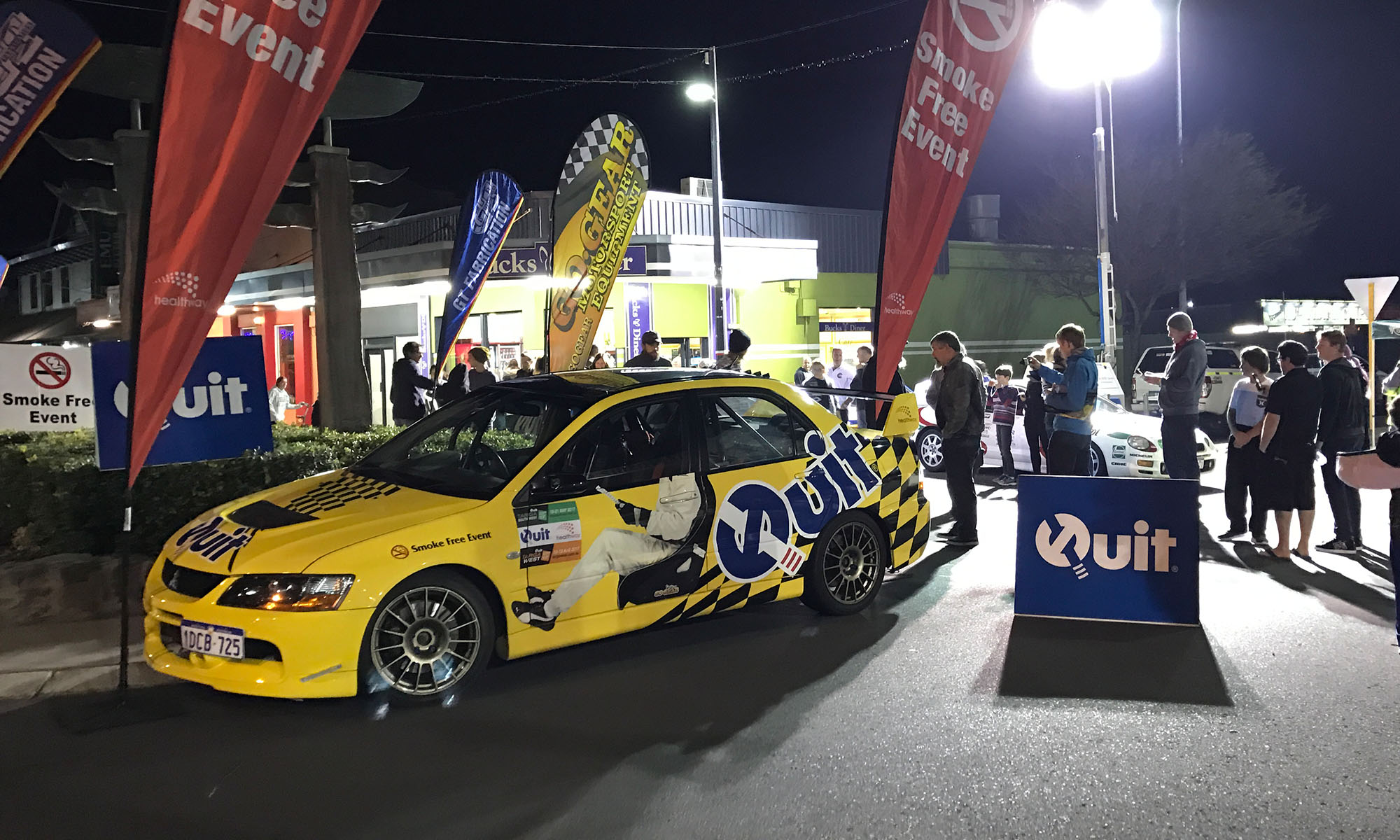 Targa West is delighted to announce Healthway and the Make Smoking History message have extended their support as major sponsors of the Targa Events for the next two years.

Healthway have been longstanding supporters of Targa West, with 2018 being the 14th year of sponsorship.

“We are pleased the sport of rallying has again been chosen as advocates for living a healthy, active lifestyle, and as promoters of the important Make Smoking History message,” said Targa West Director Ross Tapper.

“Due to the growing popularity of tarmac rallying in Western Australia, our event’s portfolio continues to grow thanks to the support of sponsors like Healthway.”

Healthway is a state government agency that promotes and facilitates good health and activities which encourages healthy lifestyles.

“Tobacco smoking is the single largest preventable cause of premature death and disease in Australia, and quitting at any age has health benefits. Targa West events are the perfect vehicle to spread the Make Smoking History message to a wide audience.”

Tapper said that that not everyone realises that motorsport requires a high level of fitness to compete.

“Rally in particularly requires fitness levels because the stages are long and demanding and you can’t afford to get fatigued,” Tapper said.

Perth’s longest and most demanding tarmac rally is Make Smoking History Targa West. Run over four days in Perth and the surrounding areas, it is the State’s premium tarmac rally attracting the best cars and drivers from WA and Australia.

Last year, a Targa Tour was introduced and novices participated in a spirited drive behind a professional lead car while learning driving techniques, co-driving tips and how rally events operate.

Competing in a Rallysprint doesn’t require the same time commitment or expense as competing in traditional Targa and rally events, thus making it a great introduction to the sport.

“Five of the six events are run on Thursday evenings after work at the Perth Motorplex making it easy to compete in motorsport during the summer,” Mr Tapper said.

“We designed the Rallysprint events to be short and sharp, to cater for the time poor rally enthusiasts, those new to tarmac rallying as well as to provide an opportunity for experienced rally drivers to keep their skills sharp in between seasons.”

Tapper said that Rallysprint requires teamwork between driver and co-driver.

“Drivers will need to negotiate obstacles in close vicinity of the road with the help of their co-driver whilst racing the clock, which is quite different to simply racing around on a race track.”

The next Rallysprint is on Thursday night (7 December), held once per month until March on Thursday evenings at Perth Motorplex on a 3.25km course that is run four times, alternating clockwise and anti clockwise each event.

The Targa season will kick off with Make Smoking History Targa South West, a two-day rally on closed roads through the picturesque areas of Manjimup and Pemberton on 18 – 20 May.

“Targa South West is an event suited to all levels of motorsport experience – from the rookie competing in their regular car, to the serious competitor with a purpose built tarmac rally car. There’s a fantastic camaraderie between all competitors, which is one of the characteristics of rallying as sport,” Tapper said.